The first step in the film-making process was to formulate an idea for submission. A concept that was both interesting and unique, but practical and achievable at the same time. With a low-to-no budget, and a limited age range and quantity of actors, coming with a concept that ticked all the boxes was more difficult than I originally expected.

Sitting at my desk with coloured pens and the initial central bubble of an empty mind-map, I initially struggled to come up with an idea.

Previously my inspiration has come from recent experiences or topical current affairs. After racking my brain and deciding my earlier encounter with a difficult vending machine would be unlikely to capture the attention of  my target audience; my fellow classmates, I decided to turn to the latter.

Rather than exploring general themes, such as the current immigration crisis, Brexit, and the up-and-coming American election, I decided to research individual stories.

The first page I chose to look at was the ‘Humans of New York’ Facebook Page. This page is a photography project that aims to encapsulate the inhabitants of New York, by providing an image of the subject and an accompanying paragraph depicting an interesting, upsetting, comical or even menial aspect of their life. Each image offers the potential for inspiration for a short story.

The photograph that offered me with the spark for my idea was an image of a women smoking, who claims she suffers from ‘electrosensitivity’- an allergy to electricity.

A particular line from the photograph’s accompanying paragraph that caught my attention was ‘When I’m exposed to electricity, it’s like one thousand scorpions stinging me. It’s like every description of fire in the bible. There is no ‘off the grid.’ This is hauntingly accurate. Nowadays it is almost impossible to escape the electromagnetic waves that travel through the air, from our mobile lines, wifi routers and power cables. I decided that I wanted to explore this concept, this version of modern hell in my film.

As a technically unproven condition, there is little scientific research on the internet, that would provide a complete list of causes, symptoms and cures. However there are many self-help, and support group pages for those who believe they suffer from the condition, which provided me with a range of information.

I read many stories from people around the world of all different ages, on the blog ‘Refugium – The Coming Electroplague’ 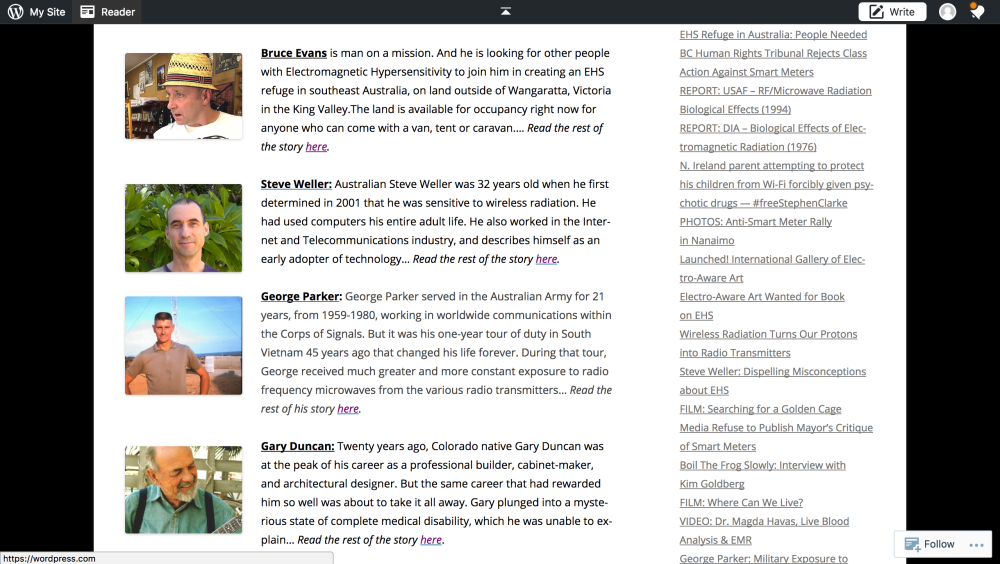 I found the story of a man named Bruce Evans, a sufferer from EHS, who was in the process of planning the creation of a refuge in Australia, in area with low electromagnetic activity, for himself and fellow sufferers. I thought this was an exceptionally interesting story, something that I could base my film on,

Another story that grabbed my attention was one of eight year old boy, Tyler Hoffan, who suffered from the condition. Many scientists believe that this self-diagnosed illness is completely mental, a subconscious manifestation of anxiety. However as young boy, his knowledge of the presence of such waves would be little if non-existent, giving the condition more merit.

This is where my concept was born.

In this film I didn’t want to explore the argument of whether the condition was real or not, but treat is as a serious and recognised illness. Creating a child character, I hope will engage the audience more, and add a element of credibility to the illness.

The location I chose is one that I knew; the play-park and surrounding streets of Hyde Park, Leeds. My main character; a nine year old boy named Ned.

The narrative structure was based on many  paradigms that I had researched when looking for a successful model, such as the three act structure, (Syd Field), The Hero’s Journey (Joseph Campbell, Christian Vogler). With the film only being five minutes long I decided it would be best to not complicate the narrative with the combination of complex content and an uncommon structure.

I have one protagonist Ned, who crosses the threshold from ordinary to extraordinary worlds when diagnosed with electrosensitivity. His allies; his three school friends who attempt to make his last night in the UK before his departure to Australia, a more comfortable one. The trials and tribulation they face are the difficulties brought on when attempting to shut off the cities power. There is a beginning middle and end. There is rising action,  a midpoint where the direction of the plot changes, a climax followed by a resolution; a denouement.

Having decided upon a set narrative structure, the age range and goals of my characters, and designed location I was able to write a treatment for submission.
Campbell, J. 1949. A Hero with a Thousand Faces. USA: New World Library